Empathy: a 21st century skill at home and at large 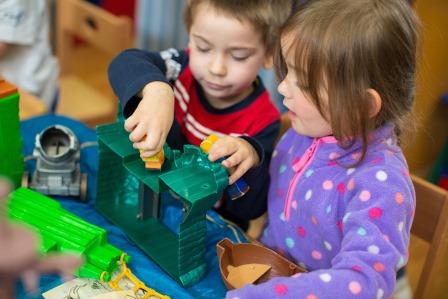 It’s easy to dismiss toy aisle choices as political correctness yet, as every early childhood educator knows, play-based learning is how children acquire skills. And empathy is a learned skill. Young boys deserve support to acquire empathy just as much as girls do say leading researchers. Empathy is necessary for happiness, well being—and for work say business commentators. This blog was first posted on MindShift, 25 June 2014 under the title Why It’s Imperative to Teach Empathy to Boys.

When searching for toys for their children at chain toy stores, parents typically encounter the following scenario: toy aisles are color-coded pink and blue. They shouldn’t bother looking for LEGOS, blocks, and trucks in the pink aisle, and they certainly won’t find baby dolls in the blue aisle.

While parents, researchers, and educators decry the lack of STEM toys for girls—and rightly so—what often goes unnoticed is that assigning genders to toys harms boys, as well. Too often children’s playrooms reinforce gender stereotypes that put boys at risk of failing to gain skills critical for success in life and work. The most important of these? Empathy.

Meg Bear, Group Vice President of Oracle’s Social Cloud, calls empathy ‘the critical 21st century skill.’ She believes it’s the ‘difference between good and great’ when it comes to personal and professional success. Researchers at Greater Good Science Center out of the University of California, Berkeley, echo Bear’s assertion. They define empathy as ‘the ability to sense other people’s emotions, coupled with the ability to imagine what someone else might be thinking or feeling’.

Why is empathy important? First, empathy breeds courage. In a recent study of nearly 900 youth, ages 11-13, Nicola Abbott and Lindsey Cameron’s, psychology researchers at University of Kent, found that participants with higher levels of empathy were more likely to engage in ‘assertive bystander behaviour’. In other words, they were willing to stand up to a bully on behalf of someone outside their peer group. This kind of courage can be life changing for a victim of bullying and prevent the damaging effects of social isolation and exclusion that often lead to anxiety and depression.

parents … spend less time reading and telling stories to their sons than to their daughters … as early as nine months [of age], researchers found a gender gap in literary activities.

It’s clear we need to cultivate empathy in all children, but gender stereotypes — often reinforced in playrooms — risk leaving boys, in particular, with a social deficit. Empathy also yields happiness. People with empathy have stronger interpersonal connections and are more eager to collaborate, effectively negotiate, demonstrate compassion, and offer support. They’re team players, and employers recognise this. So important has this skill become that a research team in England, after engaging in a six-month review of its schools, submitted a report that placed empathy in the top three of important outcomes for its students. Similarly, employers, when asked to compile a list of the ‘20 People Skills You Need to Succeed at Work,’ placed it fifth.

Empathy drives thoughtful problem solving. Empathic problem solvers put themselves in others’ shoes in a way that allows them to design life-saving baby warmers, easily collapsible baby strollers, and energy-saving car sharing services. In addition, they’re often willing to work with others to solve persistent and, at times, larger problems. Rather than hoarding their knowledge and expertise, they open themselves up to what Greg Satell calls cognitive collaboration, in order to serve patients, clients, students, and even their respective fields, more effectively.

It’s clear we need to cultivate empathy in all children, but gender stereotypes—often reinforced in playrooms—risk leaving boys, in particular, with a social deficit.

What parents and educators can do

Play with dolls. Boys can be just as interested as girls in playing with dolls. Just watch little boys when they interact with an infant: they want to pat the baby’s head and see the little toes, and their faces show distress when that baby starts to cry. Recognising the importance of young children’s interactions with babies for building social skills, organisations like Roots of Empathy do just that. They bring babies into elementary school classrooms as part of their empathy building, evidence-based programs. Don’t have a baby at hand? Dolls allow young children to simulate dressing, feeding, calming and caring for babies—particularly if adults participate and model this care. For parents of boys, it’s worth a trip to the pink aisles to find one.

Pretend play helps children self-regulate, develop a strong ‘theory of mind,’ and integrate positive and negative emotions. When children adopt different personas, they face dilemmas and solve problems ‘in character’—in essence, they’re taking empathy for a test drive. Play researcher Dorothy Singer, Senior Researcher at Yale University’s School of Medicine, contends that make believe helps children ‘be anyone they wish’. Through it, they ‘learn how to cope with feelings, how to bring the large, confusing world into a small, manageable size; and how to become socially adept as they share, take turns and cooperate with each other.’ Parents can expand boy’s empathic skills through pretend play by blurring the traditional pink-blue boundary lines. Toy kitchens should co-exist with trucks, doll houses with action figures.

Empathy is a learned behaviour … ‘There is no gene for empathy’.

Read together. Researchers have shown that reading fiction promotes empathy. Children’s book author and illustrator, Anne Dewdney, echoes that finding when she argues that, ‘When we open a book, and share our voice and imagination with a child, that child learns to see the world through someone else’s eyes.’ Sadly, studies reveal that parents in the U.S., Canada, and Great Britain spend less time reading and telling stories to their sons than to their daughters. In fact, in as early as nine months, researchers found a gender gap in literary activities. To address this, turn to picture books as empathy primers. Together parents and boys can look at a character’s body language and facial expressions and then identify corresponding emotions. Parents can pause while reading to ask: How do you think that make her feel? How would that make you feel? What would help him feel better?

Empathy, ‘an understanding that other people have feelings, and that those feelings count,’ is a learned behaviour. For boys, as for girls, that learning begins in infancy. As University of Wisconsin’s Carolyn Zahn-Waxler aptly notes, ‘There is no gene for empathy’. Parents play a key role in nurturing empathy, from explaining others’ feelings to encouraging prosocial behaviours with friends and siblings. Playroom toys and forms of play are equally important. Given all the benefits associated with empathy for success in life and work, it seems like now, more than ever, we need to mind the gap.

Gayle Allen spent nearly two decades as a teacher, school leader, and founder of two professional development institutes. Gayle holds an Ed.D. from Teachers College, Columbia University, where she focused her research on teacher learning. Gayle serves on the advisory board for BioBuilder Educational Foundation and blogs at Connecting the Thoughts.

Deborah Farmer Kris taught elementary, middle, and high school and served as a charter school administrator. Deborah was an associate at Boston University’s Center for the Advancement of Ethics and Character for ten years, researching, writing and consulting with schools and is the mother of two young children.